What You Probably Don’t Know About the Nature Deficit Disorder

The term nature-deficit disorder was coined by author Richard Louv to describe the widening gap and disconnect between our children and nature. Barring those lucky few who live in the countryside and in greener areas, we all suffer from some degree of nature deficit. 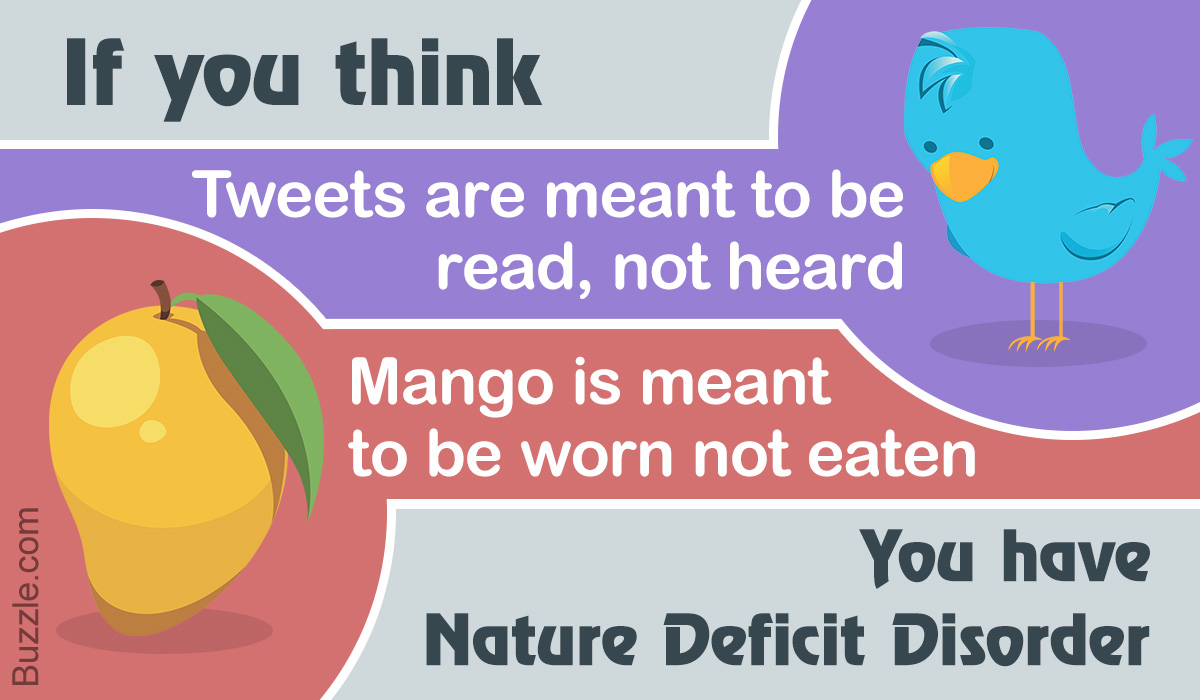 The term nature-deficit disorder was coined by author Richard Louv to describe the widening gap and disconnect between our children and nature. Barring those lucky few who live in the countryside and in greener areas, we all suffer from some degree of nature deficit.

One of the most important gifts a parent can give a child is his or her own infectious enthusiasm for the outdoors. ~ Richard Louv

Imagine if only children today were able to frolic in gardens, open fields, and go camping more often. If they were given the choice of playing amidst nature, they wouldn’t be spending a large chunk of their childhood immersed in technology.

Richard Louv, the author of ‘Last Child in the Woods: Saving Our Children from Nature-Deficit Disorder’ couldn’t have coined a better term than ‘nature-deficit disorder’, to describe the widening gap between children and nature. Even though he calls it a disorder, it has not yet been recognized by the Diagnostic and Statistical Manual of Mental Disorders (DSM).

Nature deficit disorder is the hypothesis aimed at explaining the phenomenon wherein, parental paranoia for the safety of their children, restricted access to natural habitat, and the exaggeration of news by the media has “scared the children straight out of the woods and fields”.

According to Louv, the term describes “the human costs of alienation from nature, among them: diminished use of the senses, attention difficulties, and higher rates of physical and emotional illnesses. The disorder can be detected in individuals, families, and communities.” Here is an overview of the nature deficit disorder and how it can impact our lives.

➜ If the only greenery you have seen lately is on the television and video games.
➜ The term “Winter” instinctively reminds you of the house stark motto from the Game of Thrones series.
➜ FarmVille is the closet you have gotten to an actual farm.
➜ You boast of the number of virtual pets you own and how much you love them.
➜ If you think that photosynthesis is the name of a new Photography App!
➜ You have not eaten a real orange since ages but drink orange juice from cartons every single day.
➜ In your mind, blackberry and apple are companies first.
➜ The only dew you have experienced lately is through drinking Mountain Dew.
➜ You need nature sounds playing in the background to help you sleep.
➜ You think trees are a waste of space and must be replaced to make way for more parking area.

➜ The first and foremost factor that interferes with the interaction between children and nature is the lack of natural space, area, or habitat, in or around the neighborhood or city. Additionally, the accessibility to such parks and preserves is further restricted by the rules and regulations incorporated by these facilities.

➜ The growing fear of “stranger danger” has made most parents wary of the security of their children. Which is why, parents prefer having their children spend time indoors, where they are comparatively safer.

➜ Having the child play video games or spend hours on the computer seems like a more viable option, than to have the child explore the great outdoors.

➜ Recent studies have also revealed an interconnection between the increasing use of electronic gadgets and media among children and the simultaneous decline in the number of children visiting Nation Parks in the United States.

➜ Schools are assigning excess homework which is depriving kids of their leisure time to play and have fun.

How to Invite Nature into Your Life

➜ Wake up early in the morning to observe the mist and dewdrops settled on the grass and leaves near your home.
➜ Listen to the chirping of birds and feel the breeze.
➜ Visit the closet aquarium or zoo in your city or town and check out all the animals and species they have.
➜ Plant a sapling or soak seeds in water to see how they germinate.
➜ Take pictures or collect as many varieties of flowers and leaves as you can from your neighborhood and make a scrapbook.
➜ Make it a point to visit a national park at least once a year or travel around the country and see new landscapes, animals, and birds.
➜ Go trekking and hiking if possible. Take your kids fishing or to the beach more often.
➜ Reduce the amount of time spent on the computer and instead go out for a leisurely stroll.
➜ If you can, try to sit in a quiet place and paint the scenery around you. It could be something as simple as a tree, a bird, or a fountain.
➜ Visit a pet shelter and spend some time with the animals there, or if possible, adopt a furry friend!

Advantages of Connecting with Nature

➜ Recent scientific evidence points towards the importance of nature experiences for children and how it helps in their cognitive, creative, and emotional development. It also helps children develop a deeper sense of wonder, curiosity, and attachment with the Earth.
➜ Studies also revealed that, children who played outdoors in natural and open spaces were more likely to create their own games. Such children played cooperatively and showed more sportsmanship.
➜ Studies conducted in 1990s have already showcased that, the schools which initiated outdoor settings for teaching had students who fared better in all spectrum of academics as compared to other schools.
➜ Children who have access to nearby nature can gain a lot as well, as long as they are allowed to venture outside, and see and interact with nature. It may not seem much to us, but for children these small interactions can mean a whole lot more than we can comprehend.
➜ Children who go camping, fishing, and hiking more often, tend to be more observant about their surroundings. Since all their senses are functioning in unison and at optimum levels, they tend to grasp and retain information better.
➜ People who experience the serenity of nature are able to cope with stress, anxiety, and depression in a better manner.

Disadvantages of Disconnect with Nature

➜ According to child advocacy expert Richard Louv’s research, children are spending very less quality time with nature, which in turn is affecting their health and well-being and leading to attention disorders and lack of focus in school.
➜ The impact of not being close to nature is not limited to children alone. It can affect adults as well, leading to physical, emotional, and mental distress.
➜ The lack of immersion in nature can lead to depression, stress, obesity, and several other health implications among people living in concrete jungles.
➜ The evident disengagement between children and nature is likely to adversely affect the health of our future generation, as well as the Earth in the coming years.
➜ Richard Louv has also attributed the rise of troublesome childhood conditions, such as Attention Deficit Disorder (ADD) and obesity to the lack of connection and association with Mother Nature.

The only way to reverse nature deficit disorder is to start small and take safe risks. Take small strolls in and around your neighborhood and help your child observe the birds, the bark and leaves of trees, lift and observe small pebbles, and scrutinize the soil.

Nature deficit disorder may not be a real disorder but it does have real implications on the growth and development of children and adults alike. The only way to reverse the damage is to step outdoors and start reconnecting with nature, so that we can stop and truly appreciate its many splendid wonders.