Diaper parties are not only gaining a lot of popularity these days, but they also have several concepts added to them, like beer parties. 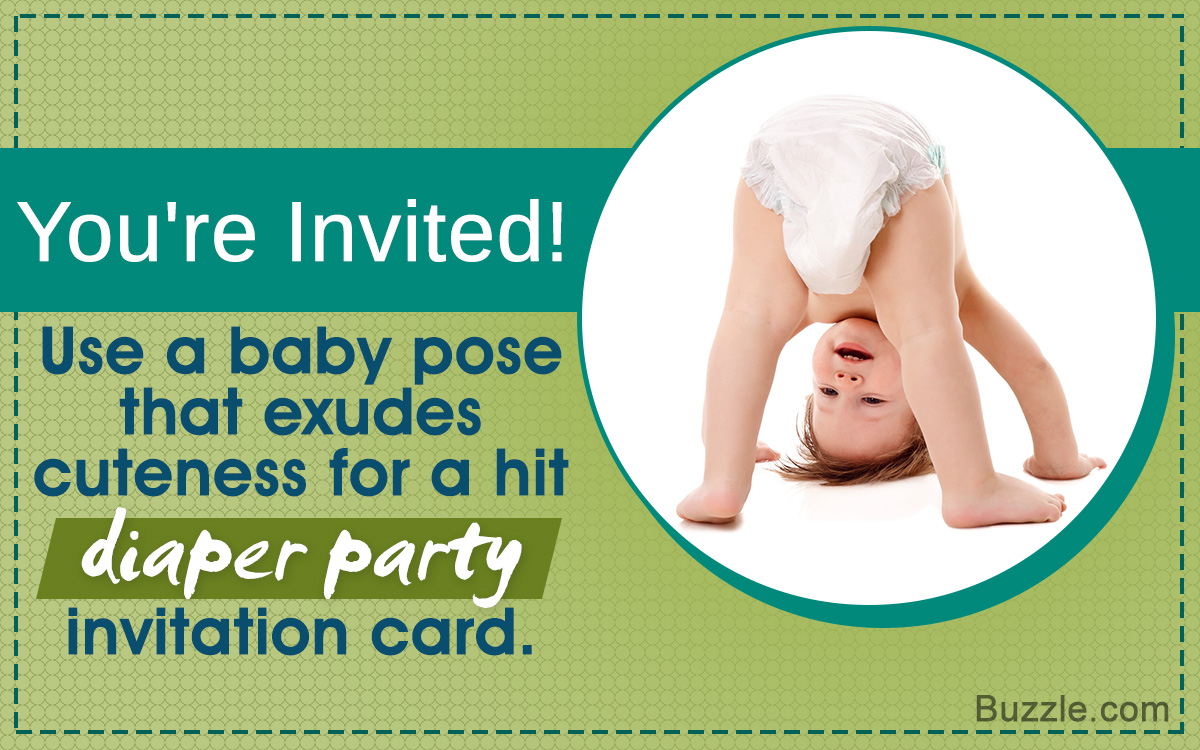 Diaper parties are not only gaining a lot of popularity these days, but they also have several concepts added to them, like beer parties.

While many people host separate diaper and beer parties, the growing trend these days is to host a coed party, and have a little of both in it.

Ladies and gentlemen, there is a new theme in town―diaper parties … which (would you know) are just like baby showers in essence, except for the fact that the whole theme revolves around diapers. The idea behind the emergence of this concept came into existence as a necessity. Parents around the world realized that while all the baby formula, powders, creams, and clothes are, no doubt, important, what seems to be the most important part of a newborn baby’s or a toddler’s wardrobe is a―you guessed it right―diaper. Diapers, it came into light, were never enough, and they seemed to be in constant demand. So tada da da da―diaper party!

The main crux of this party is that the mother-to-be is gifted with diapers and more diapers, and then because the keyword here is diapers, the entire party, including the food, decorations, games, and gifts―they all revolve around them. If you’re planning on hosting a diaper party for a friend, then you’ll be in need of some ideas. And that is what we will be doing in this AptParenting article―telling you how to throw a diaper party.

What’s beer got to do with a diaper party, you ask? That’s another, rather interesting concept that has gained a lot of popularity in the recent times. Since baby showers were essentially for women, the father-to-be started feeling left out, and so, some dude out there decided enough is enough and hosted a beer and diaper party for his friend.

This party is completely informal―it does not have any set rules of what goes and what doesn’t. In fact, most times, it’s a couple of guys who have beer and hang out with the expectant father. There could, however, be games brought into this scenario. And sometimes, the parties are co-ed as well.

With that being said, here’s a low-down of what it takes to host a diaper party and what exactly goes into the planning.

The invitations should ideally revolve around the diaper theme in one way or another. The same stands for a beer and diaper party as well. Here are a few samples that you can draw inspiration from.

Diapers have to make an appearance here as well. So you can have cut outs of diaper-shaped paper and make streamers of the same on the wall, or you can have a banner in the shape of a diaper with the announcement ‘It’s a Girl’ or ‘It’s a Boy’. Other than that, a diaper cake can make for the perfect centerpiece.

How do diapers figure into this one, you ask? While diaper-shaped food would be just plain wrong, there is nothing wrong with serving the food in plates that have been cut out into the shape of a diaper. Instead of diapers, bring in other elements that are associated with babies, like baby footprints, rattles, animal pictures and the like.

And if one just has to see the diaper theme to the very end, foods that are off white (we don’t need to tell you why) may be served. These include lasagna or pasta. Or one can simply have a spread of sandwiches, chips and dip, and burgers.

When it comes to food for a beer and diaper party, things are a little different―beer being the main ingredient. Usually, there is a barbecue held and that’s about it. There are definitely no dainty cupcakes adorning the plates.

What would a party be without any games… here are some that you can host and have a fantastic time.

To participate in the diaper raffle, everyone has to bring in a basket of diapers. Only that will make them eligible for a ticket. At the end of the party, a number is pulled out and the winner wins a basket of assorted gifts.

Not what it reads like. So what you do is take a couple of diapers and pour in different-smelling food items, like, jam in one, BBQ sauce in the other and the like. Next, you blindfold the participants and pass the diapers to them. They have to smell these and identify the food product. Have everyone take turns, and the person who guesses the maximum products right, wins.

Make chits with the words ‘It’s a girl’ or ‘It’s a boy’, depending on what you’re having. Make only one chit that has the correct term on it, the rest will say something else. Make about 12 of these, with only one that is the corresponding chit. Next, roll the chits, place them in balloons, and blow the balloons up. Blow up several other balloons as well so that they fill the entire floor. The aim of the task is to find the correct chit. To do this, the balloons have to be burst, not with the hands or the feet, but by sitting on them. Makes for some hilarious times, we will tell you that.

Tie a huge bunch of diapers and display them right at the entrance. As the ladies walk in, ask them to guess the number of diapers and write the number down along with their names. When the games are in full session, check for the answers and announce the winner.

When it comes to the beer party, there will be a change in the theme and types of games. Here are some games for soon-to-be dads and their friends.

Announce at the start of the party that ‘Baby’ is the keyword, and that every time someone says the word, they have to chug a glass of beer … that has been filled in a baby bottle―If we absolutely must have some fun while doing it.

At the start of the party put a balloon filled with water in all the guys’ shirts. The objective of the game is to see who can go the longest without the balloon bursting. If you want this to be a game of dry fun, you can go in for an alternative―have the guys put in a blown balloon into their shirt and then line up activities like picking up coins from the floor, or putting on socks. The guy whose balloon bursts last, wins.

This is especially hilarious because it has to do with the guys. Arrange for plastic baby doll & place doll on changing table. Put a cloth and some pins around the doll. The objective of the game is that guys have to diaper it in the most minimal time. They can take turns to do this and they will be timed. The guy who takes the least amount of time will be declared winner. You can increase difficulty level of game by tying their left hand behind their back & then having them perform same task.

The whole focus of the party is to gift diapers to the mother-to-be. So let there be diaper cakes and diaper baskets and more of the same. Of course, other than packets of diapers, you can have a gift basket with the essentials as well, like, baby wipes (goes really well with the diapers), baby powder, and creams.

To bring in the diaper theme in case of return gifts, these can be arranged in bags or packets that have been cut out in the shape of diapers―much like the invitations.

And that is how it’s done. Now do you see the kind of fun you can have hosting that party? Not only will you love the look of pure joy on your friend’s face, but you will also love the crazy fun you have playing those games. And when everyone praises the decor and the food and all of that, you’ll know it was all worth it. Gather them diapers then, we have a party to throw.