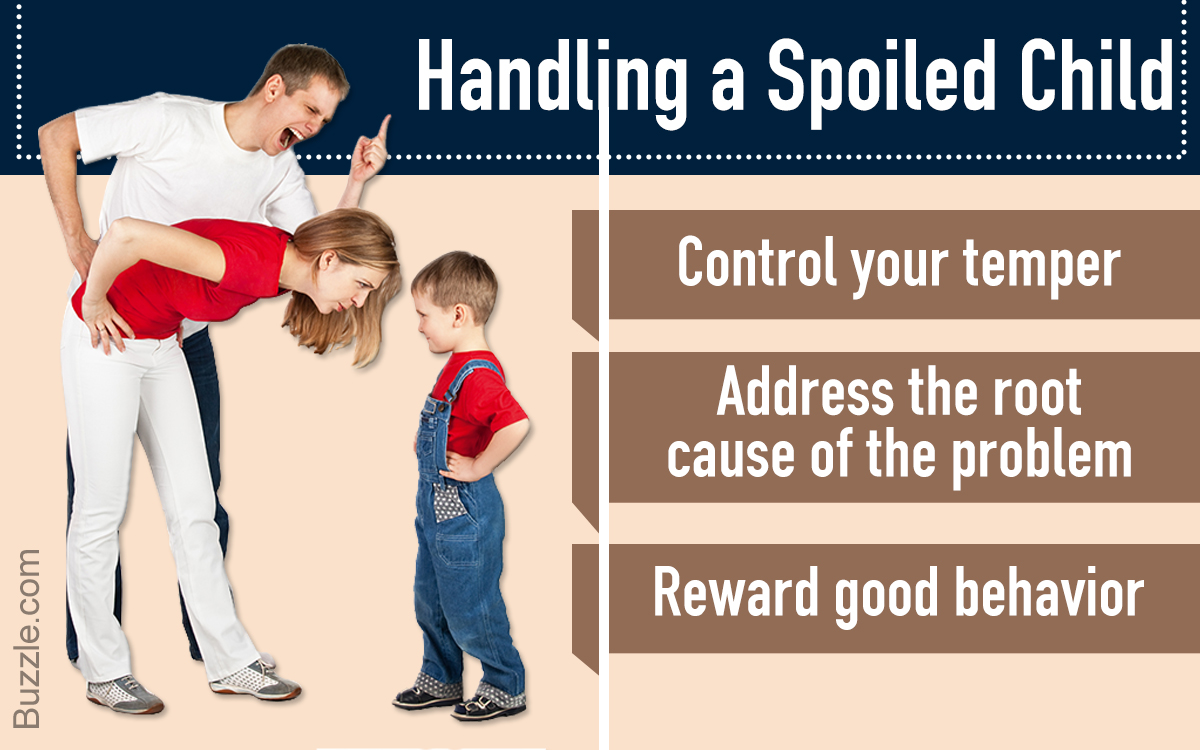 Self-centered behavior, demands of instant gratification of material wants (not needs), tantrums on failing to get what they want, attention seeking and narcissistic behavior, manipulation by making you, the parents, feel guilty, etc., are some of the characteristic traits of a spoiled child. A spoiled child is the product of overindulgent parents, who assume that money can substitute for their time and attention towards their children, or sometimes you just cannot say, “No!”, because you ‘love your child so much’! Don’t get me wrong though! I know how it can really break your heart, to refuse something to someone you love more than anything else in the whole wide world, and you also have the best intentions at heart, when you buy things for your children. But the problem arises, when the child has not been taught the value of these things, or if these things have been given to him too easily in spite of the child displaying less than satisfactory behavior lately. In such a case, the child begins to take these things for granted, and even begins to expect them for no particular reason, and you end up spoiling your child, which now puts you in a pickle, because you didn’t predict/expect this. You are dealing with a spoiled child, and you have to do this in the best possible way, to avoid guilt trips, fits of anger, tantrums and the like. Here are a few tips to help you.

Keep Your Temper in Check

First and most important, is to keep your temper under control. Shouting at your child is not going to get him to listen to you, and it will simply increase your stress levels. Keep your voice even, and when your child begins to increase his/her voice, firmly tell them to lower their voice. If they refuse to listen to you, do not stand and continue listening to them. Ignore their behavior, and tell them you will listen to them only when they are ready to talk reasonably.

Start as early as Possible

As soon as it dawns on you that your child has been manipulating you lately with tears, and pouts and by laying guilt on you (which you probably take knowingly or unknowingly), the alarm bells should go off in your head. STOP NOW! Do not indulge your child unnecessarily, give him whatever he wants just to stop him from disturbing you in the middle of something important, or simply to stop his crying, tantrums, or whining! All this tells your child that a little crying, yelling or complaining will get him what he wants.

Better than punishing bad behavior, is to reward the good behavior displayed by your child. Punishing bad behavior will tell your child not to do certain things, but rewarding good behavior will also inculcate good habits in children and tell them what kind of behavior is nice, reasonable, and good. Decide on a particular thing, for e.g., if you think your child has too many toys, instead of scolding him every time he asks for another toy, explain to him how he cannot possibly play with more than a couple of toys at a time. Then ask him to sort out his toys and for every extra toy that he decides to give up to some needy child, give him something that he has wanted for a long time. But that doesn’t mean that you give him other material things, ALL THE TIME. Most of the time, words of praise, hugs and kisses, etc. should be enough. Only once in a while, give rewards in the form of material possessions. You do not want him to end up thinking that it is a replacement scheme, where he can trade one thing for another!

Ask your child to maintain a list of all the toys, gadgets, clothes, etc., that he owns, along with the number of each of those things. Ask him to keep adding to that list every time he gets something new. Every time you head to the supermarket or a mall, ask your child to make a list of all the things he wants. Then ask him to refer to the previous list and decide whether he actually needs (NOT wants) all the items on his list. Decide how many items he is going to be allowed, and set limits for your child BEFORE you get to the store and tell him very strictly that at no cost is he going to get anything else.

When your child says he wants a few things, ask him to decide which are the things he WANTS, and which are the things that he NEEDS. Teach him to put the needs before the wants. At the same time, teach him that sometimes even needs are not fulfilled, and you have to manage till they are! Now, I’m not saying do not provide well for your child. What I mean is, if his iPod is not working, and has been sent for repair, teach him that a new iPod is a WANT, not NEED, and that he can very well do without an iPod for a couple of weeks! Simple enough? It will not scar your child in the long term, although that may be the exact feeling you get when he cries. Gadgets and material possessions are supposed to make our lives easy, but you do not want your child growing up a slave to these things.

When you have set limits, and then mutually agreed on following them, do not entertain any unreasonable behavior from your child. Do not lose your patience either, because he is only a child and he is bound to be tempted with all the ‘wow’ things he sees in the malls! But firmly tell him to stick to his part of the deal, and if he really wants the new toy/gadget, then add it to the next list. If he refuses to listen, simply ignore his whining and crying. When this happens a couple of times, he will realize that tears/threats/guilt-laying no longer work on you, and eventually stop resorting to such techniques.

Address the Root Cause of the Problem

Try to find out whether there is a pattern or a trigger in your child’s tantrums/threats etc. If he starts building a tantrum every time you refuse to do something with him, like playing games, or if he gets angry every time he sees something new that his friends have, then learn to recognize the signs. In the earlier case, he just wants your attention, which you may be finding difficult to give, because of your busy schedule. In such a case, compulsorily set a time each day, maybe an hour (whenever it’s convenient for the both of you), to spend with your child. In the second case, he probably feels that his friends’ parents love them more and hence they keep getting new things for them. Explain to him, that love should not be equated with money, that it goes way beyond that. There are other ways of showing your love for someone, so he should not think that you love him any less than his friends’ parents love them!

Teach Them to Value and Earn Things

Once in a while, sit down and talk to them. I mean, really talk! Tell them about under privileged kids, orphans, teach your child to count the ways in which he is lucky instead of complaining about what he doesn’t have. Once in a while ask him to help with the housework and give him incentives after he has done the work! Like maybe give him a book, if he has taken out the trash, cleaned the car or mowed the lawn. This will also teach him to appreciate the value of things since he has worked hard to earn/ deserve them! He will definitely treasure them more and take care of them without being told to do so… What more can you ask for, right?

A kid’s mind is innocent. What he sees, he believes. If he sees that his tantrums are being rewarded, he will continue to do so, whereas if he sees that it is not an effective way to get things, he will eventually tire of them and stop. Also, keep a check on your behavior. Next time you are buying something for your child, because you couldn’t take him to the movies, or got caught up in work and could not host a party for his birthday, stop yourself. No amount of toys or other things can ever make up for the time that you don’t spend with him every day, and no parent can be so busy that he can’t spend at least an hour with his child every day, or even every other day. In a child’s world, Love is spelled T-I-M-E. Give that to your child, and you will notice the changes!