When people stay away from each other, their strengths get divided. Family bestows them with a collective power to withstand all kinds of trials and tribulations. This is why having a family is extremely important.

When people stay away from each other, their strengths get divided. Family bestows them with a collective power to withstand all kinds of trials and tribulations. This is why having a family is extremely important. 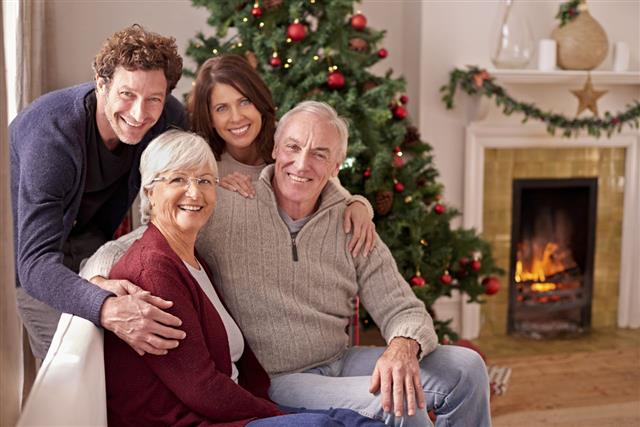 Man is a social animal and so it is impossible for him to stay alone for a long period of time. He constantly needs people who can be with him and support him during tough times and encourage him when he strides forward in life. He needs people who can share his happy as well as sorrowful moments, people whom he can trust and find solace in. These are the people he can go to at any point in time, love them, fight with them, and yet have faith that he will never be left alone till the very end. These are the people he shares his bloodline with – his parents, children and siblings. His spouse also forms a part of this set-up, though not of his bloodline. They are his family.

Family, as a concept, came into existence when the hunting-gathering ancestors of humans began to live together in groups to ensure protection against predators. With the passage of time and the advent of agriculture as a means of subsistence, these groups became even more close-knit with their members sharing social and economic responsibilities. This further gave way to feelings of care, affection and love and thus came into existence the standardized model of a family.

Dependence on each other and sharing of rights and responsibilities gave way to the concept of marriage, a custom with social grant. This imparted a definite structure to the family which now consisted essentially of two married people of opposite sexes and their children along with other relatives related to them by blood.

Traditionally, all members of the same lineage lived together in a ‘joint family’, which are found even today in many cultures. The emergence of ‘nuclear families’ was a change in the traditional set-up that took place with a series of transitions occurring in the socio-economic spheres of society.

Family is a social unit wherein two or more individuals of different age groups and characteristic traits decide to stay together under one roof, in a hierarchical set-up, sharing rights and responsibilities.

According to the U.S. Census Bureau, a family refers to “two or more persons related by birth, marriage or adoption, who reside together”. Anthropologists interpret families to be ‘social institutions’ that perform crucial functions both for their own members and for members of society.

The term ‘social institution’ has deep implications. That is to say that family, as a social entity, is a unit that is created and identified by society. This further implies that the structure of families is different in different cultures, depending on the norms their societies are based on.

As institutions, families function on the basis of certain predefined standards and have roles to perform for the benefit of not only a given familial unit but society as a whole. In return of what families, as social units, give to society, society is also considered to be responsible to look after the welfare of its people.

Functions of a Family

As a social unit, at the very base of the societal pyramid, a family has certain functions to fulfill. Accomplishment of these functions is extremely important for society to function smoothly. These are the primary aspects which form the entire basis of this social institution. These functions include the following:

Though traditionally, families were rigidly based on the fulfillment of these functions, it must be noted that with the change in times, the functions of a family have also undergone a considerable amount of change. Families now, have to cater to functions according to the needs and demands of modern societies in order to assure welfare and stability.

Can Family be Defined?

With everything said and done, it has to be noted that family is a very subjective term. Every person has his own way of identifying and describing his family.

Though the classic family structure has been defined by social norms, it means different things to different people and at different points in time. In this sense, any group with which an individual identifies himself, or feels that he belongs there, may become his family.

This group may not essentially comprise his parents, siblings, children or spouse. On the contrary, it may consist his close friends and acquaintances, or can be one’s foster family as well.

The bottom-line of every healthy family is nurturing relationships with utmost compassion, love and care, and supporting its members during phases of hardships and troubles. A family that manages to fulfill these basic emotional and social needs becomes a stable unit and is termed as a ‘happy family’.

Some others that do not, are sociologically termed as ‘dysfunctional families’ because they cannot impart stability to their members. But again, the reasons for families to become dysfunctional are numerous and varied. Leo Tolstoy has rightly said in his is novel ‘Anna Karenina‘ that ‘Happy families are all alike; every unhappy family is unhappy in its own way’.

When it comes to the portrayal of family ties, movies, the most popular form of public entertainment, are not far behind. But even movies are more or less inspired by society. In fact, they portray things or aspects prominently which are prevalent in society in some form or the other. Till date, numerous movies have depicted all sorts of families with love, care and affection as their three cornerstones.

Sid, the ground sloth is in danger in the dinosaur world and Ellie, the female elephant is in labor. She asks her husband Manny, the male elephant to continue the hunt for Sid, while Diego, the tiger stays back with Ellie. What else can be a perfect example of a close-knit family bonded by love and care?

A human kid being raised by a wolf! We call it foster, they called it love. And not only the wolf, the entire jungle takes care of the kid and makes him into Mowgli – the hero of the tale. Even after he returns to the “civilized world”, his heart still craves for the love of his “jungle family”.

Remember the scene, where Edward introduces Bella to his FAMILY? Seeing the passion with which he introduces her, one might have not even realized that they are actually a bunch of people who are not related to each other in any way, neither by background nor by blood but still staying together under one roof like a happy family. No doubt they belong to the same clan of vampires, but hey, vampires are bloodless and heartless creatures, aren’t they?

When Mia finds out that she is a princess and belongs to a well-known royal family, her new identity changes her life forever. Two different families and so many people to love and be loved! That’s what family means, isn’t it?

Parents usually sacrifice a lot for their kids, but when this kid begins a search for a wife for his father, we have only one expression…”Awwh…!” That’s the power of family bonding where everyone strives hard to make the others happy.